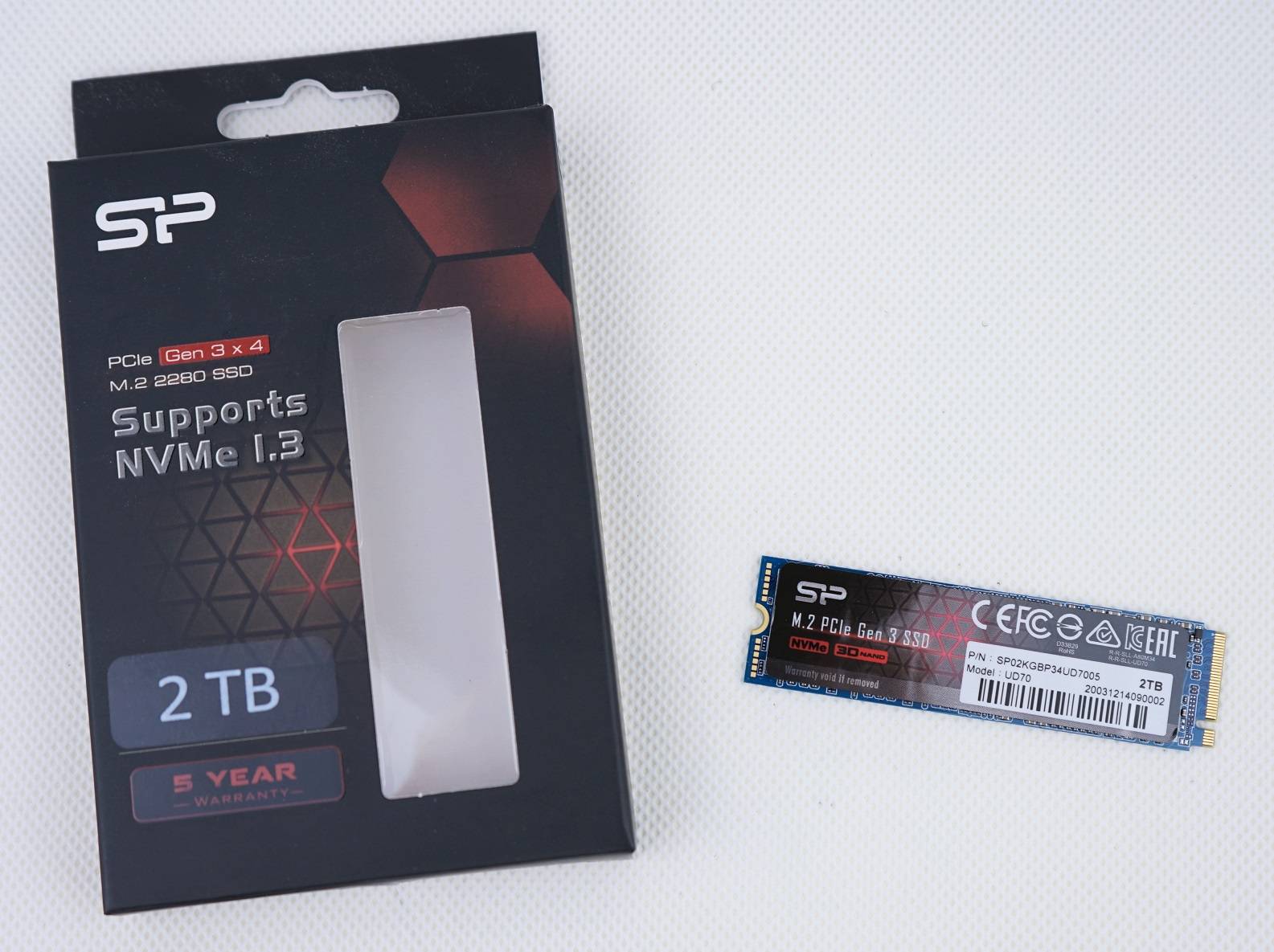 The drive has a MTBF of 1.8 million hours and comes with a 5-year warranty. Its rated endurance varies from 120 TBW to 530 TBW. 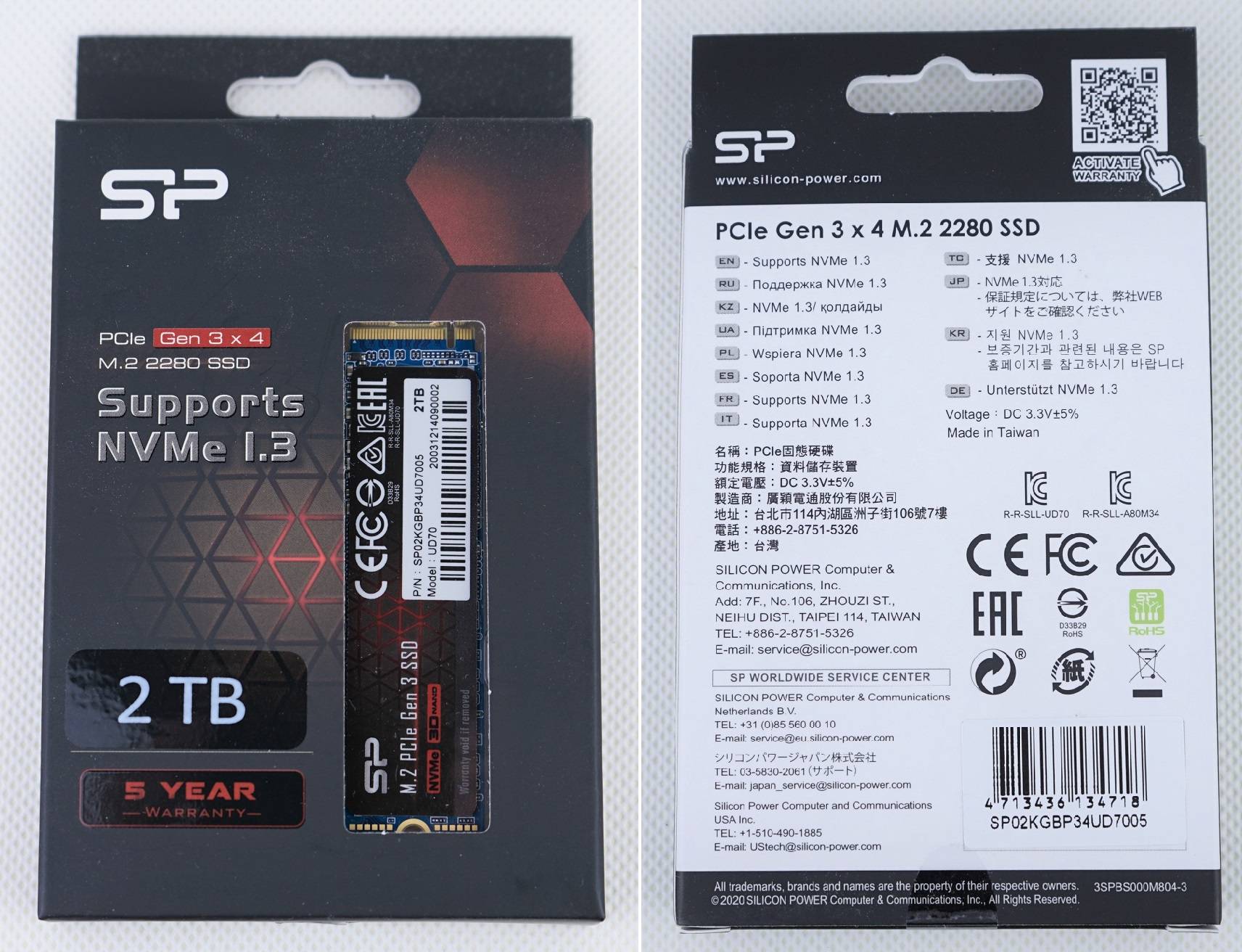 The packaging of the UD70 remains identical as other NVMe SSDs from Silicon Power. The simple cardboard box has a small plastic window at the front, showing the actual drive behind it. Contact information for tech support is printed at the back. 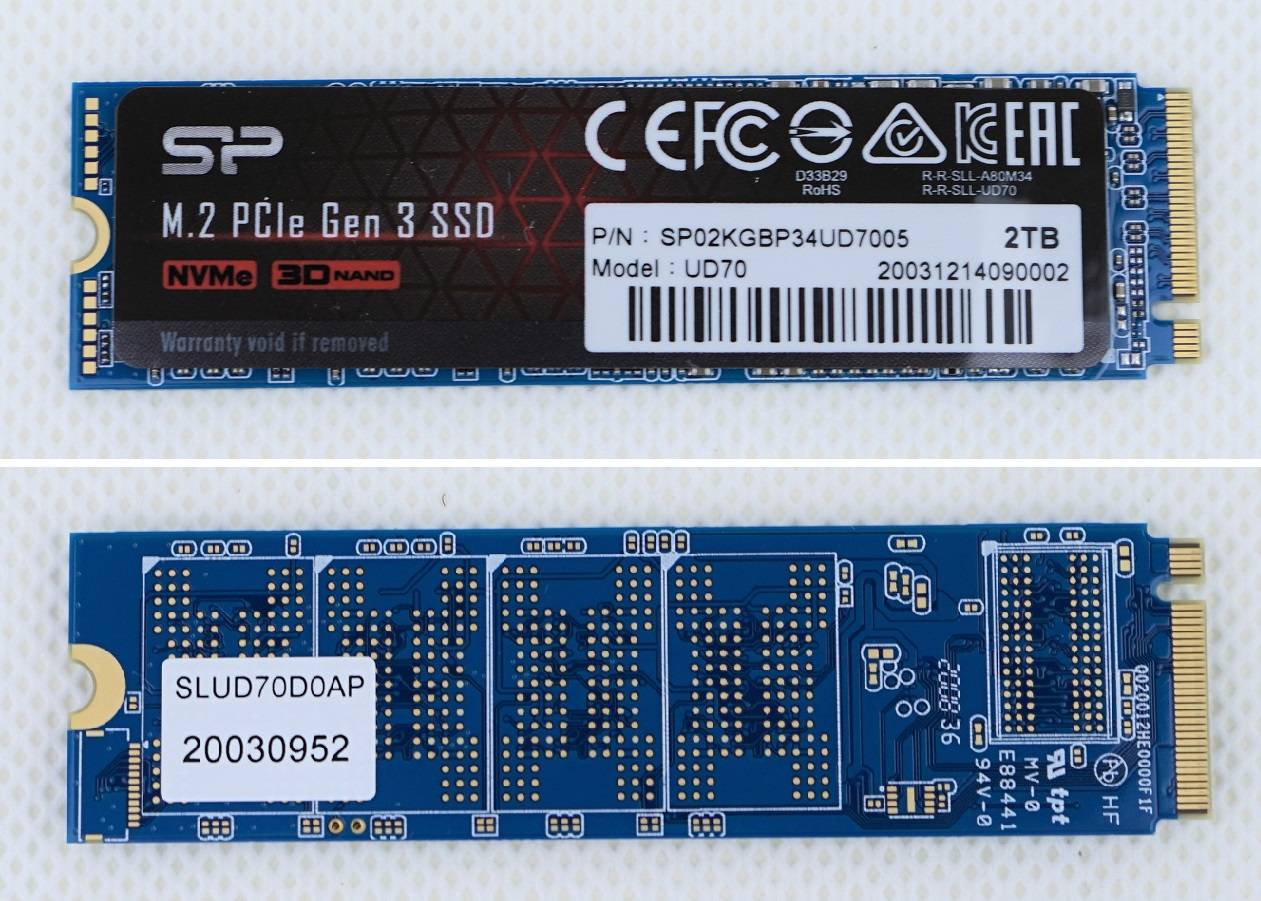 Only one side of the blue printed circuit board (PCB) is fitted with components for our 2 TB UD70 sample (SP02KGBP34UD7005). The sticker on top has the part number, model name and serial number of the SSD. There is no additional heatsink or enclosure. 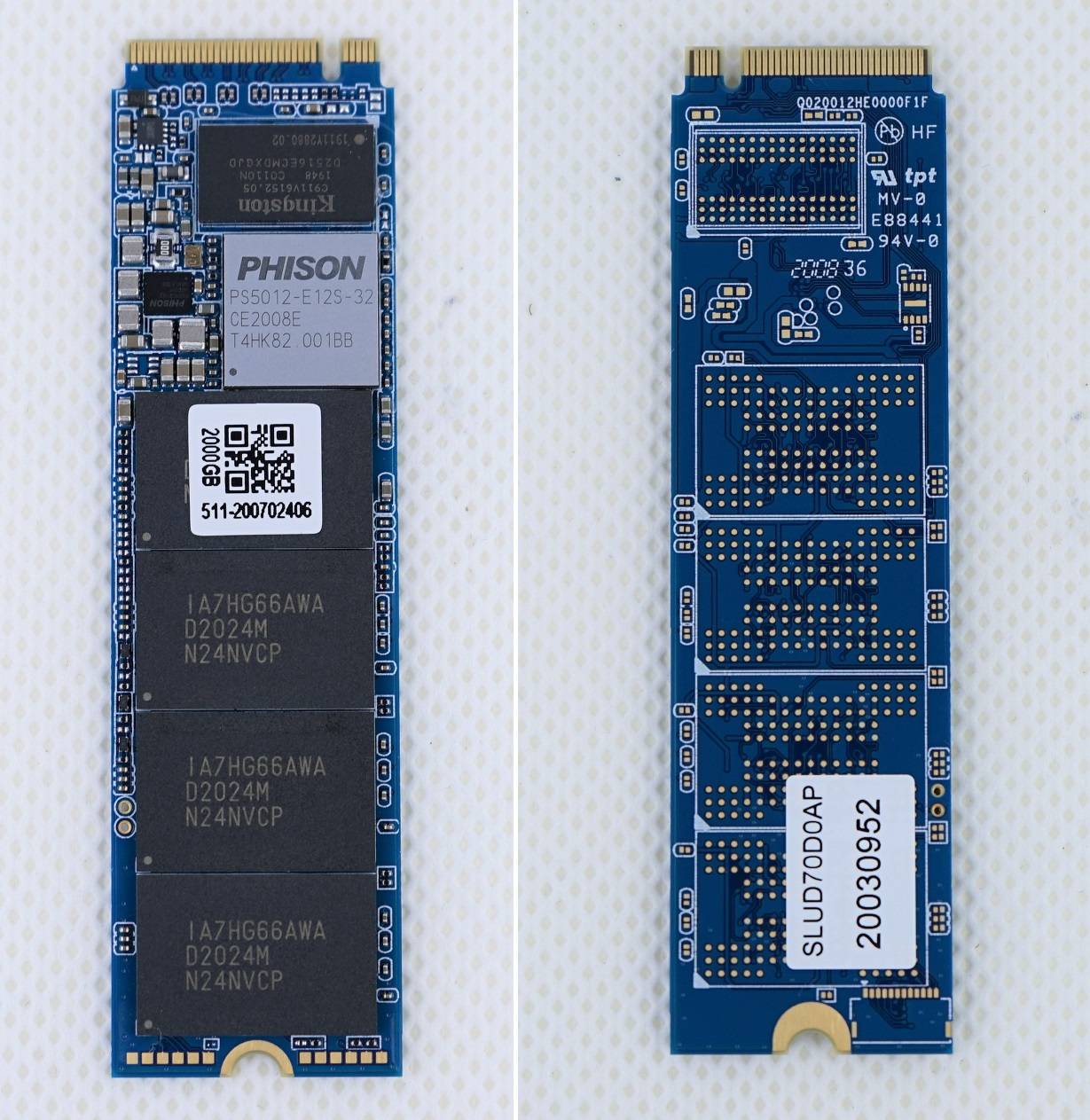 The QLC (Quad-Level Cell) NAND flash makes it possible to store up to 4 bits of data per cell, instead of 3 bits (TLC). It allows for more capacity on each package, thus cheaper price for the entire SSD. However, QLC is considerably less durable than TLC, which the memory cell will start wearing out after less write cycles (~1000 times vs ~3000 times). The UD70 is rated to write at least 530 TB to the drive, while the P34A80 is at 3115 TB, for the 2 TB models.

To test the performance of the solid-state drive, we use four well-established storage benchmarking software. They are CrystalDiskMark, ATTO Disk Benchmark, AS SSD Benchmark, as well as HD Tune Pro.

CrystalDiskMark can measure both sequential and random 4KB read/write speeds with a queue depth of 32. ATTO Disk Benchmark can test how the drive performs across different transfer block sizes, mostly in a sequential environment. AS SSD Benchmark can provide both normal read/write speed and the IOPS performance of the drive. HD Tune Pro can be used to simulate a large file transfer of up to 100 GB.

We also recorded the time to copy three files of 10 GB, 500 MB and 250 MB from a RAM disk to the SSD, to simulate a real-world situation. 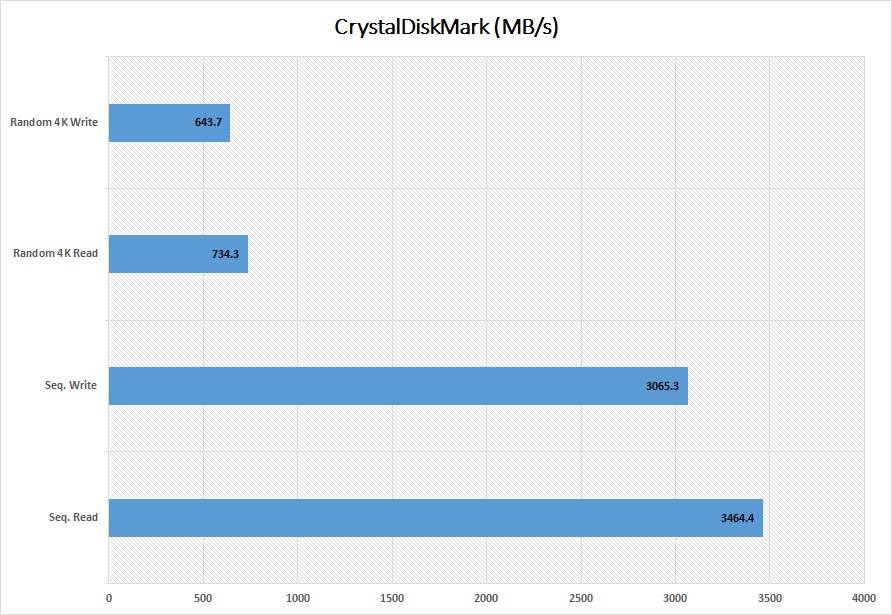 In CrystalDiskMark, the UD70 did reasonably well with sequential read/write speeds at 3460 MB/s and 3060 MB/s, which are slightly over Silicon Power’s promoted values. Random 4K performance (QD32) dropped to 730 MB/s and 640 MB/s. 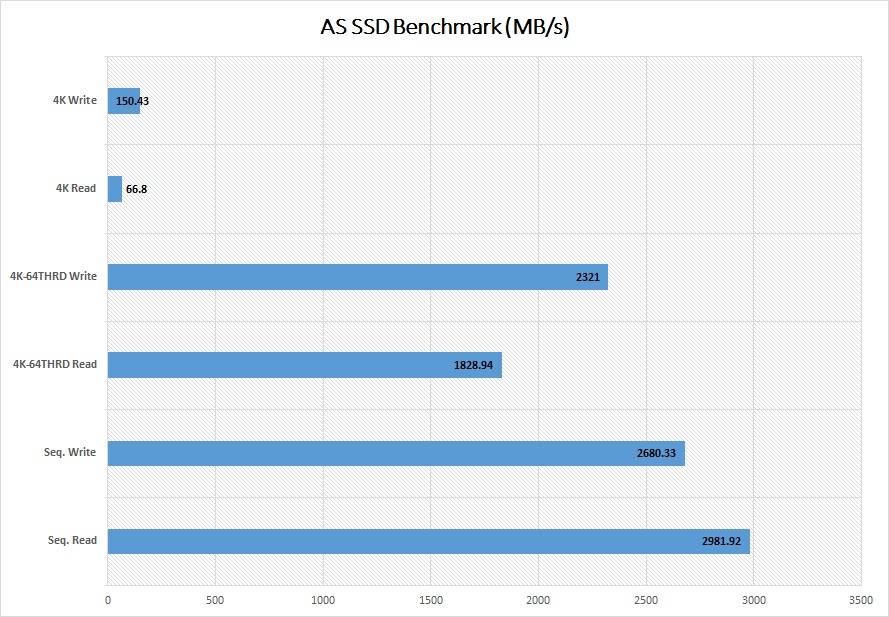 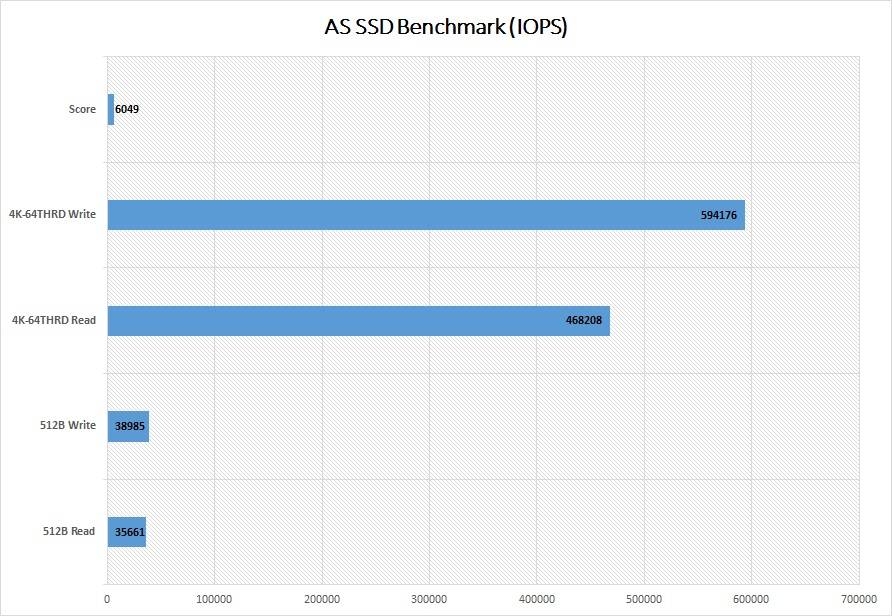 IOPS number represents how well a drive handles random input and output operations. The UD70 scored 6049 in the test. It got 468208 IOPS in read and 594176 IOPS in write. 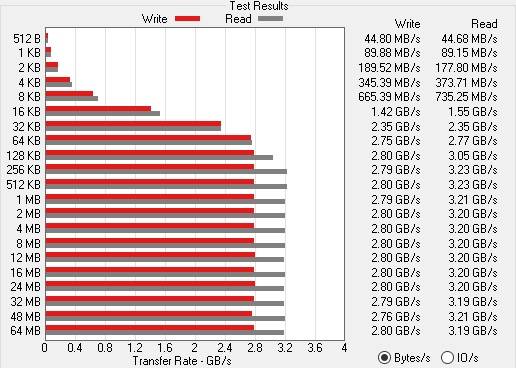 When the file size increased from 128 KB, the read/write speeds began to stabilize in ATTO Disk Benchmark, which were maxed out at 3.20 GB/s and 2.80 GB/s. 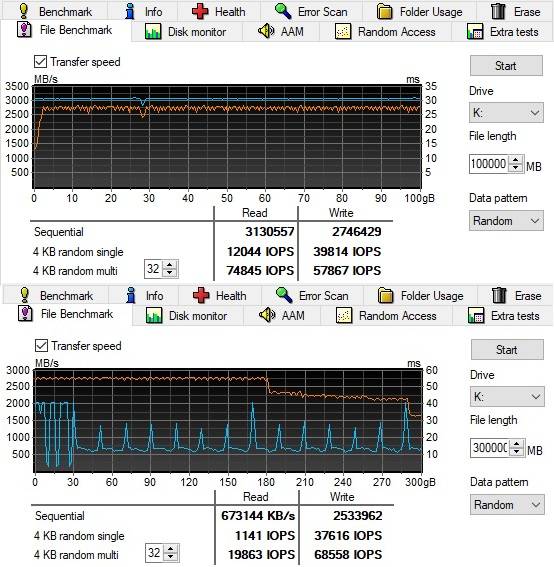 We were actually surprised when the UD70 performed a lot better than our other tested NVMe drives. In our normal simulated 100 GB transfer in HD Tune, the UD70 was able to maintain write speed at over 2700 MB/s.

After some research, we found out that most QLC NVMe SSDs will make 20% to 25% of its capacity to act as SLC NAND flash (vs 2% to 5% in TLC drives), which is called pseudo-SLC cache. This is also the reason why the UD70 can write at full speed for the first 180 GB. Though, this solution has a major drawback, which there will not have enough empty space to switch to SLC-mode when the SSD is almost full. And compare to TLC, QLC NAND flash generally has way slower raw writing speed at under 300 MB/s (vs ~1000 MB/s).

The UD70 also experienced some levels of thermal throttling in the 300 GB test, which explains the fluctuations in read and write performance in the latter part. 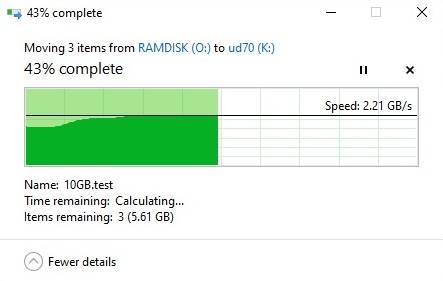 It took about 7.08 seconds to complete the full copy of the three files, sized around 15 GB. The write speed hovered between 2.0 GB/s to 2.21 GB/s most of the time.

The UD70 had very similar sequential and random 4K performance as other PCIe 3.0×4 SSDs with the identical PS5012-E12S controller. The QLC NAND flash apparently did not affect smaller-sized and short bursty transfers.

As we mentioned before, the insanely huge (> 180 GB) SLC cache allowed the UD70 to write large files at full speed (~2740 MB/s), without exposing the dreadfully slow raw speed for the QLC NAND flash. The cache was not saturated in our 100 GB test.

The Silicon Power UD70 is a part of the new generation for budget-oriented NVMe SSDs with QLC NAND flash. Sequential performance was great at around 3000 MB/s. Because of the bigger SLC cache, sustained write speed from a fresh drive was awesome at over 2700 MB/s. The lower durability (TBW or Terabytes Written) should not be a serious problem for the average consumers. Using the drive for write-heavy applications is not recommended, such as being a scratch disk for programs.

The UD70 costs $191.99 USD for 2TB and $109.99 USD for 1TB (MSRP), along with the standard 5-year warranty. Not only is it substantially cheaper than normal TLC-equipped NVMe SSDs, but it is also less pricey than the same-tier QLC drives in the market. For comparison, the Sabrent Rocket Q and Corsair MP400 are priced at $219.99 USD and $244.99 USD (MSRP) respectively.

You can purchase the SSD from your local/online resellers or the links below from Amazon and Newegg.

Thanks Silicon Power for providing us the SSD for review. (Review Sample) How to Install FreeNAS 11 (TrueNAS)